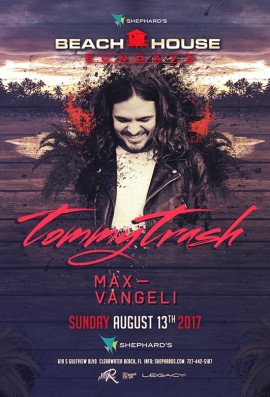 Beach House Sundays is a weekly Spring/Summer Concert Series held in the heart of the Gulf of Mexico, Clearwater Beach at the Shephard’s Beach Resorts’ Tiki Beach. Beach House Sundays are hosted by We R Promotions, Legacy Promotions, and Tampa Bay’s Hit Music Station 93.3 FLZ’s Brian Fink. Beach House Sundays showcases local DJ’s and producers during the day and at night closes out the night with huge EDM acts from all over the world. August 13th featured electronic legend Tommy Trash. Tommy Trash is one of the EDM scene’s biggest promises, is considered as one of the highlights of 2011. Ever since he appeared on the scene in 2006, Tommy has been rocking the charts and the dance floors, and with over 50 productions (originals and remixes), and also he has quickly been recognised as one of Australia’s biggest talents. His peak era would begin in mid-2011, thanks to one of his most recognisable tunes, titled “The End”. This has been one of his largest hits to date. This made him quickly noticed by high-profile DJs such as Tiësto, David Guetta, Swedish House Mafia, Afrojack, and Laidback Luke. “The End” pushed Tommy further into international fame.